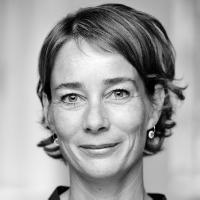 Solveig Gade is an Associate Professor in Theatre and Performance Studies at the University of Copenhagen. Research areas include new dramaturgical paradigms in contemporary theatre and performance, the relation between art and politics, war and aesthetics, performance and archives, and contemporary performance and climate crisis. She is currently writing a book on documentary artistic responses to contemporary image war and digital war, focusing on works by artists  Rabih Mroué, Abu Lawrence Hamdan, Arkadi Zaides, Milo Rau, Hito Steyerl, Laura Poitras, Trevor Paglen, and Candice Breitz.

Related to the book project, she was a member of the Velux-funded collective research projects Conflict of Images – Images of Conflict (2017-21) and Aesthetics and War (2018-22).

She is co-editor of the book (W)Archives: Archival Imaginaries, War, and Contemporary Art (with Daniela Agostinho, Nanna Bonde Thylstrup and Kristin Veel), published by Sternberg Press/MIT Press, 2021, and she is author of the monograph Intervention og kunst: Sociale og politiske strategier i samtidskunsten, published by Politisk revy in 2010. Her research has appeared in journals such as Performance Research, TDR: The Drama Review, Nordic Theatre Studies, Nordic Journal of Aesthetics, The Journal of War and Culture Studies, K&K, Passage, Peripeti, and Kritik.

Together with Anders Engberg-Pedersen, Kristine Strandmose Toft and Jens Christian Borrebye Bjering she is currently editing the book The Aesthetics of War, which will appear with the MIT Press in 2023.

She is co-PI in the Velux funded collective research project "Oikos: Care and Crisis in the 21st Century".

Solveig is also a dramaturge and at the Royal Danish Theatre, Betty Nansen Teatret,  Sort/Hvid, and The Norwegan National Theatre she has collaborated with directors and companies such as Elisa Kragerup, Christian Lollike, Corpus, and Madame Nielsen. Before joining UCPH as an associate professor she was a dramaturge at the Royal Danish Theatre (2008-14), post doc at UCPH (2014-16), Associate Professor at the Department of Dramaturgy at Aarhus University (2016-19), and from 2019-2020 she was a professor at The Danish National School for Performing Arts

Teaching at BA-level includes course in Theatre History, Performance Analysis and Complex Dramaturgy - and at MA-level Theoretical and Analytical Methods and Contexts as well as Research Practices within Theatre and Performance Studies.