"Robots are boring - humans are not" - This statement marks the incentive to investigate and create robotic technologies from a cultural and aesthetics perspective.

One important aspect of robot culture explores how human beings imagine robots in present and future societies. The five robot images at the top all represent humanoid robots. Most of these robots are imaginary, yet familiar and slightly nostalgic. Future robots may look nothing at all like these - but how then?

Current trends within caretaking industries as well as in industrial production, agriculture, and education, suggest that there will be more robots around in the future. Robots are increasingly being designed to interact closely with human beings, and to be sensitive to behaviour and movement of human beings in various types of environments. This leads to fundamental questions of: what is a robot, and how do we imagine the future relationship between humans and robots?

On the panel: David Bell and Marika Rose, who work in Utopian Studies and Philosophical Theology, respectively; Karen de Perthuis, a Fashion Studies scholar from Australia; and ...

Politics of the Machines

Conference on Politics of the Machines - Art and After will take place in Copenhagen May 15-17, 2018. There will be a Call for Papers in the fall, so keep an eye open! Read more: eva-copenhagen.dk. 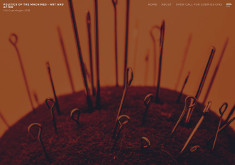 The vision for UCPH Makerspace is to be a university-wide socio-technical infrastructure providing tools and expertise facilitating interdisciplinary making. Read about the visions.